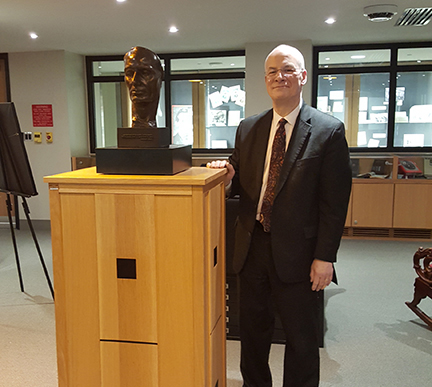 The Allen County Public Library located in Fort Wayne, IN, and the home of the Lincoln Financial Foundation Collection recently acquired The Face of Lincoln sculpture produced by the North Carolina Gallery of Fine Art (NCGFA) based in Wilmington, NC.  This American masterpiece by Robert Merrell Gage (1892-1981) now resides in four museums throughout the United States and many private collections.

“The Allen County Public Library is honored and excited to add The Face of Lincoln to our collection.  ACPL serves as host and curator of thousands of items from the Lincoln Financial Foundation Collection, including photographs and documents belonging or related to President Abraham Lincoln and his family, observes Curt Witcher, Director of Special Collections, Allen County Public Library. “The Face of Lincoln brings a new and important perspective for those seeking to better understand how Lincoln carried the burdens of governing a nation at war with itself. The great American sculptor Merrell Gage’s interpretation of the Volk 1860 plaster face cast shows that gravity was already etched into the lines of Lincoln’s face, a precursor of the burdens he would carry as President. We are confident that the Face of Lincoln will become a must-see for everyone from visiting Lincoln scholars to area school students.”

The Lincoln Financial Collection is one of the largest private collections of Abraham Lincoln-related material in existence and was donated to the people of Indiana. Today the Collection is housed in two institutions, the Indiana State Museum in Indianapolis and the Allen County Public Library in Fort Wayne.  According to Art Conservator John Short of the North Carolina Gallery of Fine Art, it further reinforces how meaningful the Face of Lincoln has become.

“The 1956 Merrell Gage interpretation of Lincoln’s 1860 face casting is incredibly special for two reasons. It is the exact representation of Lincoln’s features and bone structure and it depicts his poignant demeanor so noted by the poet Walt Whitman. Having lived with it for over 30 years, I feel as though I know him as a friend,” said Short.

The Allen County Public Library is now creating a new public space for its collection.  This multi-million-dollar renovation is in process and will create over 2,500 square feet of gallery space.  Upon completion, it will be known as the Rolland Center for Lincoln Research.  The expected grand opening will be late spring 2021.  Mr. John Clell Hamm and Mr. John Rutledge Short of the NC Gallery of Fine Art have been invited to speak and attend this exciting event where their sculpture will be unveiled.  The Academy Award-winning movie “The Face of Lincoln” starring California Artist, Merrell Gage will also be shown. 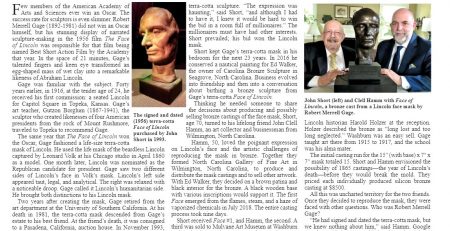