About the Artist, Robert Merrell Gage 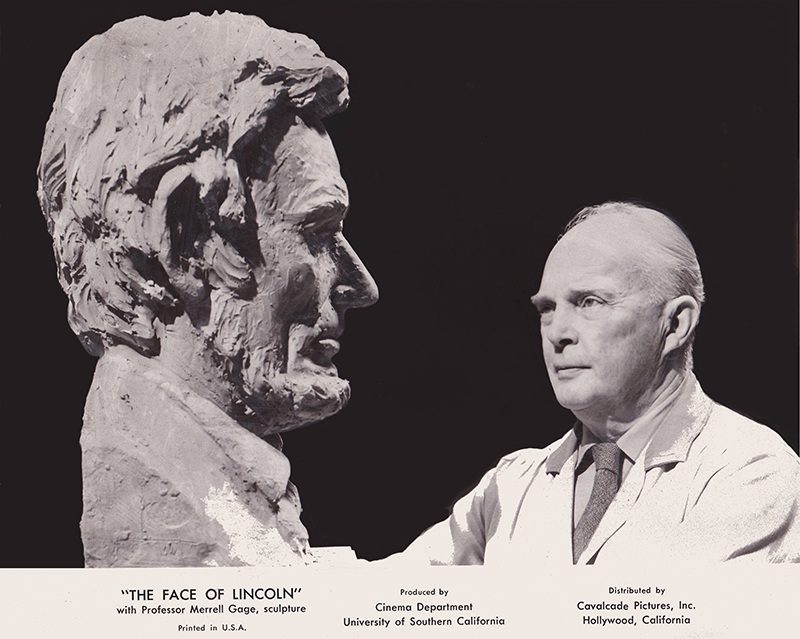 “Gutzon Borglum, the man who carved the famous figures on Mount Rushmore, called Robert Merrell Gage “that steady-eyed young sculptor,” and from those steady eyes came a vision of art that spoke of strong values, American values, Kansan values. An alumni of the most sophisticated art schools, Robert Merrell Gage turned for subject matter to the basics of American history, the stories of the western struggle, and the lives of heroes of the American soul.

Gage was born in 1892 in Topeka, and educated in the Topeka public schools and at Washburn College. He left Kansas after graduation to study sculpture with Borglum and Robert Henri, two exponents of the “American Theme” in art, in both New York and France.

Returning to Topeka in 1916, the young sculptor set up shop in a barn behind his house on Fillmore Street and began his first public commission, the magnificent statue of Lincoln that rests on the Kansas State Capitol grounds. Deeply impressed by the writings of Walt Whitman and the example of Abraham Lincoln, Gage portrayed and interpreted the freedom and dignity of the American experience through the medium of his art. After a stint in the armed services during World War I, Gage began a teaching career at Washburn and at the Kansas City Art Institute.

His interests were many and they were reflected in the materials he worked with—stone, wood, metal, and clay—as well as his favorite formats, which ranged from portraiture to architectural sculpture. His subjects consistently expressed major American themes. Among his better known works are his Pioneer Mother Memorial situated a short distance from his Lincoln statue at the Capitol, his busts of Walt Whitman and John Brown at the Mulvane Art Museum on the Washburn campus, his Police Memorial and Veterans’ Fountain in Kansas City, and his History of California frieze in Beverly Hills.” (Kansas Historical Society)

“He and his family lived in a shack on Huntington Palisades before settling into a home in Santa Monica Canyon. Gage exhibited locally, fulfilled many sculpture commissions, and taught at Chouinard Art School (1928-30) and was the 13th President of the California Art club from 1932 to 1933.” (California Art Club)

“Gage executed likenesses of Lincoln in many stages of the president’s life. In 1955 Gage starred in a short film The Face of Lincoln, in which he modeled Lincoln’s features while narrating the story of his life. The film, produced by Wilbur T. Blume, won an Academy Award for Best Live Action Short Film. Gage executed numerous commissions in the Los Angeles area and served on the sculpture commission for the 1936 Olympics. His film “The Face of Jesus” was nominated for Academy Awards in 1962.” (Wikipedia)

“From 1924 until his retirement in 1958, Gage taught at the University of Southern California. The winner of many awards and honors, Gage left behind a large and excellent body of work when he died in 1981. Some have called him, and, indeed he was, “the American sculptor.” (Kansas Historical Society)